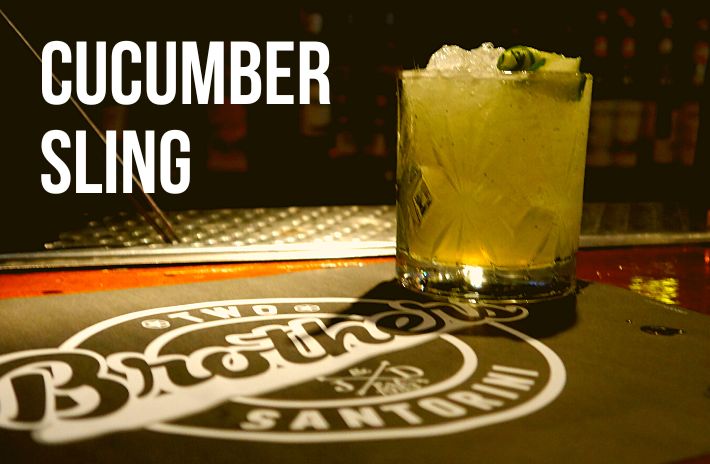 This time I was at 2 Brothers Bar Santorini / Greece. Bartender Xristos prepared the wonderful Cucumber Sling cocktail there. The 2 Brothers Bar Santorini is located in the beautiful Greek Island of Santorini, Two Brothers Bar first opened its doors in March 1983 as you guess it, by two brothers – Dimitris and Giannis. The tradition continues with the original owners sons Jack and Leuteris now running the show. From its humble beginings back then, the bar has grown to become an island favourite for visiting tourists and locals alike.

The special taste of the Cucumber Sling comes from the fresh cucumber juice and the Mastiha. Mastiha is a sweet liqueur produced with the mastikha resin from the Greek island of Chios. It has a distinctive flavor, reminiscent of pine and herbs. It is claimed to have medicinal properties and to aid digestion. 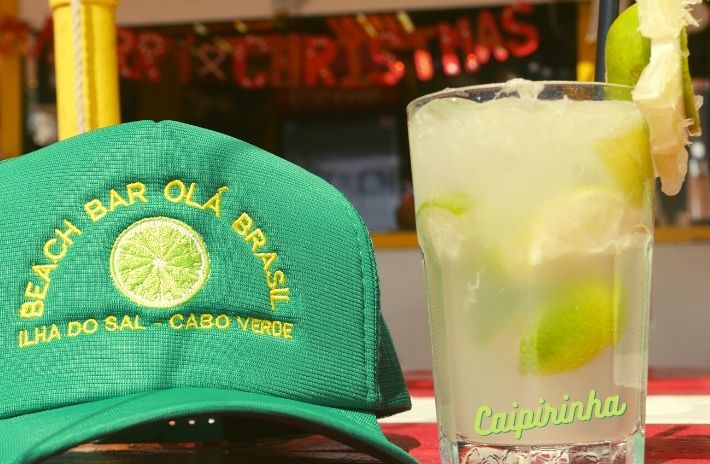 This time I was in the Beach Bar Olá Brasil in Santa Maria on the island of Sal in Cape Verde. The island of Sal is 5000 km (3000 miles) from my hometown, but only 2800 km (1700 miles) from Brazil. For this reason, there is nothing better than enjoying a wonderful Caipirinha on the beach here. Bartender Gisel of Beach Bar Olà Brasil really makes one of the best Caiprinhas in the world. The island of Sal is not very big, but there are wonderful beaches. The best beach can be found in Santa Maria. And there you will also find the Beach Bar Olà Brasil. If you ever come to Sal on Cape Verde, you shouldn’t miss the Caipirinha or one of the other excellent cocktails there.

Two things make the Beach Bar Olá Brasil a special place: The flair and the atmosphere right on the beach and the people who work there. A completely cool, relaxed crew who take care of all the guests’ wishes with devotion and love. When you’re around, say hello to Gisel and Mr. White for me.

I was recently in Italy in the beautiful city of Venice. There I found a great Italian spirit called Limoncello and a cocktail with Limoncello called Angelo Azzuro. Time has obscured the origins of Angelo Azzuro cocktail and little is known about exactly where it comes from. The story most people go with is that it is a take on the Blue Lagoon cocktail of the 1950s and 60s. It’s bright azure blue color informs the cocktails name which translates literally to “blue angel.” Careful though, this is one stiff cocktail.

Limoncello is a lemon liqueur made in the Gulf of Naples and along the Amalfi Coast, as well as in Sicily. For production, the aromas in the form of essential oils are extracted from the lemon peel with alcohol and the flavored alcohol is diluted with a water-sugar solution.

This time I was in Malmö / Sweden. Things are different in Sweden. You can’t buy alcohol in the supermarket, there are special state shops called Sytembolaged. Rumor has it that this is why some Swedes make their own alcohol at home. I noticed something similar during my visit to the Care/Of cocktail bar here in Malmö. Bartender Kash prepared the wonderful Manzanas cocktail there. Everything in the Care/Of bar was also homemade. Mezcal infused with coccchi americano and macadamia nuts, homemade grapefruit oleo and pink lady apple juice. Even the ice cubes are made in the Care/Of bar itself. And that’s what you can taste! The Manzanas cocktail has a smoky, nutty aroma and the freshness of apple juice. A really great taste experience.

You will find the Care/Of cocktail bar in the city center next to the Malmö Live Konserthus at Fiskehamnsgatan 11C. There is indoor and outdoor seating with view of Malmö’s canals and the historic city center. The interior is elegant and modern and here too, the owner Stefan made many parts himself. It is a total work of art that you should definitely try on a trip to Malmö. 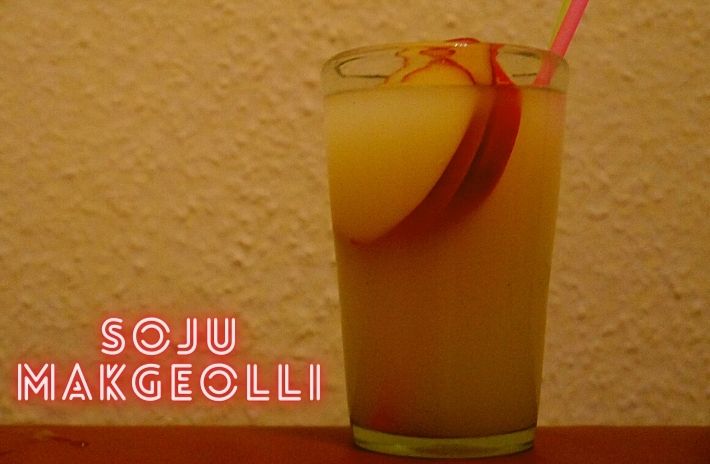 Off to Cyprus. To Paphos, to be precise. Paphos is not the largest city in Cyprus, it really doesn’t have the best beach in the world and the sights can be counted om one hand. But Paphos has probably the best cocktail bar in Cyprus – probably as compensation. And I was there. At Mr. Tippler in the picturesque old town of Paphos. There the bartender Greg welcomed me in a friendly manner at the entrance of Mr. Tippler to show me one of his signature cocktails: the Angel`s Grog. The bar is very modern and tastefully decorated and has many exceptional cocktails on the menu. And the staff is really great. If you ever come to Paphos, be sure to go to Mr. Tippler in Kosta Georgiou 3 and try some of the signature cocktails from Mr. Tippler. Perhaps one of the best things to do in Cyprus besides the good weather, and give Greg my regards.

Two things make the Angel`s Grog cocktail something very special. First, the cocktail is served in a clay pot made exclusively for Mr. Tippler by a local Cypriot pottery. Second, the Mastiha ingredient. Mastiha is a sweet liqueur produced with the mastikha resin from the Greek island of Chios. It has a distinctive flavor, reminiscent of pine and herbs. It is claimed to have medicinal properties and to aid digestion.

If you want to drink a really good Mojito, I can recommend the Mojito Beach Bar on the island of Rhodes in Greece. I was there myself and I have to say, the Mojito tastes really great in the Mojito Beach Bar. But not only the Mojito makes this beach bar an unforgettable place. The bar is right on the beach and you can relax there for a whole day. The atmosphere is very chilled and the location is really exceptional.

You can find the Mojito Beach Bar on the island of Rhodes near Gennadi right on the beach. They also offer great rooms if you want to stay longer. Just visit the website. And when you arrive at the great place, give my regards to Doro and Christina. And enjoy a Mojito! 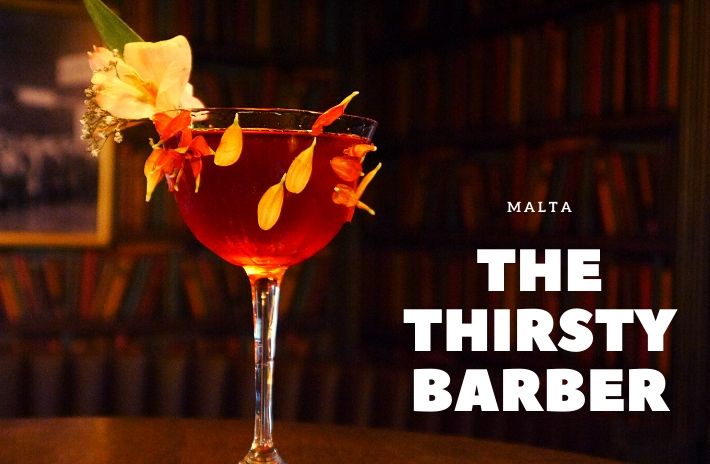 On July 1st 2020 the airport of Malta opened again. So I went to Malta, to San Ġiljan on Ball Street, where bartender Tisho was waiting for me at THE THIRSTY BARBER with a surprise. He created me a cocktail to my taste. Malta is a wonderful island and THE THIRTY BARBER is a truly exceptional cocktail bar. Here is the cocktail recipe:

THE THIRSTY BARBER is Malta`s first prohibition style bar. The Thirsty Barber boasts a unique cocktail list, developed by a team of qualified and experienced mixologists. One can choose from a variety of Prohibition-era cocktails, martinis and champagne cocktails, some of which are also to share. The bar’s signature cocktail also happens to be the most expensive on the island. I firmly believe that every guest visiting The Thirsty Barber has a fantastic experience.

What to do in Germany in cold February. Right! You get on the plane and visit sunny Israel. Really nice it is in Eilat on the Red Sea. Near the beach you will find the best cocktail bar in the city: Jasper 08. In February the temperatures in Eilat are only 25 degrees Celsius, but in summer they rise to 45 degrees Celsius. So the Jasper Iced Tea cocktail is a great refreshment.

I was very glad, that the manager Vera of Jasper 08 gave me the opportunity, that her bartender Erez showed me the making of Jasper Iced Tea. Eilat is very easy to reach via the newly built Eilat Ramon Airport and when you arrive in Eilat you must visit the Jasper 08 cocktail bar.

The Jasper 08 cocktail bar in Eilat serves up the perfect cocktail of exhilarating experiences for your vacation at the Red Sea. Right at the heart of the newly-renovated Isrotel Agamim lobby is the Jasper 08 cocktail bar, setting a new entertainment standard for hotel guests and visitors alike. This unique mega bar is the ideal setting for an exceptional night out, with its contemporary New York atmosphere reflected in exclusive cocktails, the bar’s music, and cool staff. Try the Jasper Iced Tea!

casa ma – a cocktail from Jordan 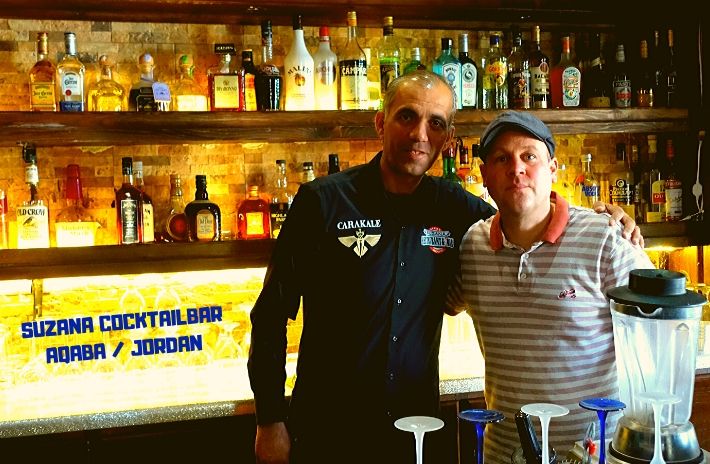 If you once drive through Aqaba, e.g. on the way to Petra, you should definitely pay a visit to the Suzana bar. The cocktail bar is located directly on a marina and is only 50 meters from the great Tala Bay beach.

Jordan shows itself to be a modern and cosmopolitan country that maintains its Islamic traditions but faces west. Alcohol is served in many places, and there are bars and occasionally western-style nightclubs. The city of Aqaba, located on the Red Sea, offers its visitors the opportunity for a beach holiday all year round.